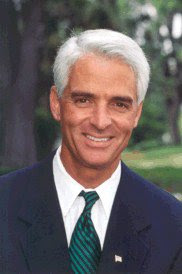 Some scuttlebutt floating around the Internets has it that McCain’s win in Florida was the result of a last-minute endorsement by Charlie Crist, Florida’s governor. The juicier rumor was that Crist demanded to be named McCain’s running mate in exchange for the endorsement.

Just a rumor. But it kind of makes sense. Crist is reasonably popular and his endorsement carried some weight. Florida is a populous state, critical to either party’s strategy for winning the general election, and one where the two parties are at effectively equal strength. Crist has a strong machine at his disposal there, so having him on the ticket could be the extra push that McCain would need to tip it into the red.

Just a rumor. If it’s not true, there are several other interesting choices that McCain might make. Mitt Romney. Elizabeth Dole. George Voinovich. Upon further consideration, I think that a McCain-Giuliani ticket would be asking too much of the GOP core, so that likely won’t happen, endorsement or no.

Just a rumor. But I thought I’d spread it a little bit.